Somehow, in spite of all the experiments which show that light will be observed by a
moving observer to arrive at c+v or c-v, where v is the speed of the observer toward
or away from the emitter, countless mathematician-physicists still argue (and teach)
that light is measured to arrive at c by the emitter and by all observers.

If anyone knows of any other variable speed of light experiments that should be on this list,
or if you see any errors on this web page,

Click on a listed item below to go to a description of the experiment.

The Sagnac Effect results when photons emitted by a light source hit a moving object at c+v or c-v,
where v is the speed of the object toward or away from the point of emission.  The experiment is
done with mirrors and a detector serving as the receiving objects.  The emitter, mirrors and detector
are mounted on a rotating platform, which means that the distance between the emitter, the mirrors
and the detector never changes, but because light travels at a finite speed (299,792,458 meters per second),
light will travel a longer distance to catch up with a mirror or detector moving away from the point of
emission, and a shorter distance to reach a mirror or detector moving toward the point of emission.

The fact that the emitter,  the mirrors and the detector are rotating at a high speed on a platform doesn't
affect how light travels from point to point.  Light still travels in straight lines, but the apparatus allows
light speed measurements to be done inside a laboratory.

The illustration below shows how photons emitted by a light source are divided up by a half-silvered mirror,
sending half the photons one way around the square course and the other half the other way while the entire
apparatus rotates at high speeds. 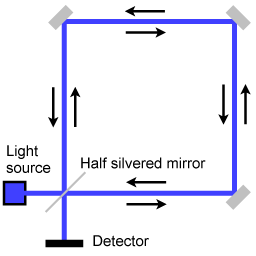 
The Sagnac effect is observed when coherent light travels around a closed loop in opposite directions and the phases
of the two signals are compared at a detector. At the source and detector, a half-silvered mirror is usually employed so
that half of the source's transmission travels one way around the device and half the other way, with both beams ending
up at the same detector again, as in the simplified Sagnac apparatus in a) and b) below.

The Sagnac effect, also called Sagnac interference, named after French physicist Georges Sagnac, is a phenomenon encountered
in interferometry that is elicited by rotation. The Sagnac effect manifests itself in a setup called a ring interferometer. A beam of
light is split and the two beams are made to follow the same path but in opposite directions. On return to the point of entry the
two light beams are allowed to exit the ring and undergo interference. The relative phases of the two exiting beams, and thus the
position of the interference fringes, are shifted according to the angular velocity of the apparatus. In other words, when the
interferometer is at rest with respect to a nonrotating frame, the light takes the same amount of time to traverse the ring in either
direction. However, when the interferometer system is spun, one beam of light has a longer path to travel than the other in order
to complete one circuit of the mechanical frame, and so takes longer, resulting in a phase difference between the two beams. This
arrangement is also called a Sagnac interferometer. Georges Sagnac set up this experiment to prove the existence of the aether
that Einstein's theory of special relativity had discarded.


The experiment doesn't prove the "existence of the aether," it just proves that the motion of an object can be
measured relative to the speed of light.  Einstein put it this way: "The introduction of a 'luminiferous ether' will
prove to be superfluous inasmuch as the view here to be developed will not require an 'absolutely stationary space'
provided with special properties, nor assign a velocity-vector to a point of the empty space in which electromagnetic
processes take place."

The detector demonstrates that the oscillation frequencies of the photons coming from the two different directions
are "out of phase," meaning that the photons took a different length of time to travel in one direction versus the other.

Links to papers about the Sagnac Effect:

A pulsar is a celestial object, thought to be a rapidly rotating neutron star, that emits regular pulses of radio waves and other electromagnetic radiation
at rates of up to one thousand pulses per second.  Because the pulse rate is extremely regular, pulsars are ideal for measuring Earth's velocity relative
to the pulsar, providing it is in line with the orbital plane of the earth as it orbits around the sun.

While I cannot find any scientific paper (other than my own) which describes this phenomenon, my paper lists astronomer web sites which
contain graphs showing the timing differences throughout the year.  An example:

Mirrors left on the moon by the Apollo missions were used in an experiment where a moving observer (on
the earth as the earth spins on its axis) measured light reflected off of one of those mirrors and found that
light emitted from a station on Earth traveled to the moon at velocity c, but the reflected light was encountered
by an Earth observer to arrive at c+v where v is the rotational velocity of the Earth toward the moon and the speed of
the Earth (v) relative to the speed of light (c) emitted from the moon.

The speed of laser light pulses launched from Earth and returned by a retro-reflector on the Moon was calculated from precision
round-trip time-of-flight measurements and modeled distances. The measured speed of light (c) in the moving observer’s rest frame
was found to exceed the canonical value c = 299,792,458 m/s by 200±10 m/s, just the speed of the observatory along the line-of-sight
due to the rotation of the Earth during the measurements. This result is a first-order violation of local Lorentz invariance; the speed
of light seems to depend on the motion of the observer after all, as in classical wave theory, which implies that a preferred reference
frame exists for the propagation of light. However, the present experiment cannot identify the physical system to which such a preferred
frame might be tied.


See also "The GPS and the constant velocity of light" by Paul Marmet (2000) http://www.newtonphysics.on.ca/illusion/

The information below is copied from: https://en.wikipedia.org/wiki/R%C3%B8mer's_determination_of_the_speed_of_light

Io is the innermost of the four moons of Jupiter discovered by Galileo in January 1610. Rømer and Cassini refer to it as the
"first satellite of Jupiter". It orbits Jupiter once every 42½ hours, and the plane of its orbit is very close to the plane of Jupiter's
orbit around the sun. This means that it passes some of each orbit in the shadow of Jupiter – an eclipse.

Viewed from the Earth, an eclipse of Io is seen in one of two ways.

For about four months after the opposition of Jupiter (from L to K in the diagram below), it is possible to view emergences of Io
from its eclipses, while for about four months before the opposition (from F to G), it is possible to view immersions of Io into
Jupiter's shadow. For about five or six months of the year, around the point of conjunction, it is impossible to observe the eclipses
of Io at all because Jupiter is too close (in the sky) to the sun. Even during the periods before and after opposition, not all of the
eclipses of Io can be observed from a given location on the Earth's surface: some eclipses will occur during the daytime for a given
location, while other eclipses will occur while Jupiter is below the horizon (hidden by the Earth itself).

The key phenomenon that Rømer observed was that the time elapsed between eclipses was not constant. Rather, it varied slightly at
different times of year. Since he was fairly confident that the orbital period of Io was not actually changing, he deduced that this was
an observational effect. The orbital paths of Earth and Jupiter being available to him, he noticed that periods in which Earth
and Jupiter were moving away from each other always corresponded to a longer interval between eclipses. Conversely, the
times when Earth and Jupiter were moving closer together were always accompanied by a decrease in the eclipse interval.
This, Rømer reasoned, could be satisfactorily explained if light possessed a finite speed, which he went on to calculate.


NASA's web page on radar guns explains how a single photon can in theory measure the speed of an oncoming car.
The link:  https://www.grc.nasa.gov/WWW/k-12/Numbers/Math/Mathematical_Thinking/how_do_police_radars.htm

The Michelson-Gale Experiment is similar to the Sagnac Effect.  Light is emitted at c and travels to a moving object where
it is received at either c+v or c-v where v in this experiment is the speed of the Earth as it rotates on its axis toward or away
from the point where the light was emitted.  The experiment is once again a comparison of the speed of light relative to
an object moving toward or away from the emitter.


The outcome of the experiment was that the angular velocity of the Earth as measured by astronomy was confirmed to within
measuring accuracy. The ring interferometer of the Michelson-Gale experiment was not calibrated by comparison with an outside
reference (which was not possible, because the setup was fixed to the Earth). From its design it could be deduced where the central
interference fringe ought to be if there would be zero shift. The measured shift was 230 parts in 1000, with an accuracy of 5 parts
in 1000. The predicted shift was 237 parts in 1000. According to Michelson/Gale, the experiment is compatible with both the idea
of a stationary ether and special relativity.

The Kennedy-Thorndike Experiment also demonstrates that motion relative to the speed of light can be measured, and there is
therefore no need for an ether (or aether) to use as a "preferred" frame of reference.


The Kennedy–Thorndike experiment, first conducted in 1932 by Roy J. Kennedy and Edward M. Thorndike, is a modified form
of the Michelson–Morley experimental procedure, testing special relativity.[1] The modification is to make one arm of the classical
Michelson–Morley (MM) apparatus shorter than the other one. While the Michelson–Morley experiment showed that the speed of
light is independent of the orientation of the apparatus, the Kennedy–Thorndike experiment showed that it is also independent of
the velocity of the apparatus in different inertial frames. It also served as a test to indirectly verify time dilation – while the negative
result of the Michelson–Morley experiment can be explained by length contraction alone, the negative result of the Kennedy–Thorndike
experiment requires time dilation in addition to length contraction to explain why no phase shifts will be detected while the Earth moves
around the Sun. The first direct confirmation of time dilation was achieved by the Ives–Stilwell experiment. Combining the results of
those three experiments, the complete Lorentz transformation can be derived.[2]

In summary, these experiments show that all motion can be measured relative to the local speed of light,
which makes the imaginary aether "superfluous" and shows that any claim by mathematicians that motion
is purely relative to another body (i.e., if I am moving relative to you at velocity v, you are also moving
relative to me at velocity v) is both wrong and preposterous.